Wow after climbing through thick unexplored rainforests of North Sumatra. We managed to set up 9 wildlife camera traps to see if there were any Sumatran tigers roaming in this neck of the woods. The trekking through virgin unexplored areas that took over five days to explore was virtually only  1% of the forests total land mass area. This is considered hidden from the rest of the world. No mention of it in any Indonesian maps not even on google maps, in fact the area has no name, its a hidden rainforests with a big secret shhhhhhh until now ! Don’t tell anyone that we have evidence that one of the rarest and one of the most critically endangered species in the world had its first ever picture taken. The ever elusive, striking and very very rare Sumatran tiger walked straight past our camera trap at night, right where we had set up our camping tents only weeks earlier. No one in the world ever knew tigers existed in this area. Probably because the forest is hidden and its been that way for thousands of years. Only the local villages know the secrets of this forest. Its 10 hours drive from any major city and to get to the local town its 3 hours drive on a roads that would test any Jeep or Range Rover followed by a canoe ride upstream for 2 hours then 1 days trekking and thats to get to the forest. No wonder its hidden!

We are thrilled to be sent this picture (thank you Haray local tiger ranger) as evidence that the Sumatran tiger lives and thrives in this part of the forests and we cant wait to see what the other cameras will reveal once we have gone back in and checked all of them.That will be another epic trip and lots of blood sweat and tears again.

This rainforest has so much unexplored areas yet to be discovered and maybe its best we keep it that way. We are passionate about protecting these last bits of virgin habitat. Its so important for tigers to have a forest like this for them to survive as a species. Hopefully it stays this way, unexplored, as these I’m sure the tigers have enjoyed thousands of years of non human conflict and destruction of their forest they call home. 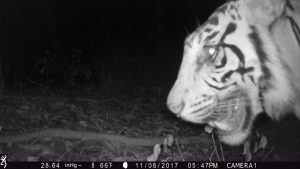