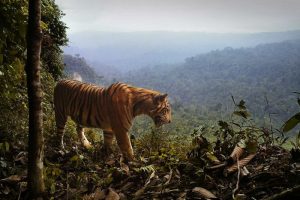 There are now believed to be only two viable populations of Sumatran tigers in the wild after a year-long survey found the tigers’ habitat is still being cleared for industries like palm oil.

Scientists estimate that the number of critically endangered tigers remaining is down to 618 as of 2012, a reduction of more than 16 per cent on estimates since 2000.

But critically, they say in a paper published in Nature Communications today, land clearing has fragmented many of those tigers into small, isolated groups that will not be able to survive long term.

With only two of the groups containing more than 30 breeding females, the risk of extinction of the Sumatran tiger (Panthera tigris sumatrae) is greater than ever, said the study’s lead author Matthew Luskin.
According to Dr Campbell, the conservation status of forests can be downgraded after they have been logged, giving industry a foothold to begin development.

“Once it’s a production area it’s a bit of a free-for-all for palm oil companies.”

Although the researchers found an overall decline in Sumatran tiger numbers, they were encouraged to find that tiger population density had increased in areas that remained untouched.

Whilst some retailers like Coles and Woolworths scored highly in 2017, a number of big brand names refused to share their data.

Tiger density has increased in undisturbed areas of Sumatra