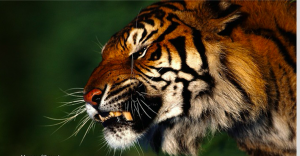 On March 12th an Indonesian man has been mauled to death by a Sumatran tiger in a remote village, authorities said Sunday, the second deadly attack this year.
Yusri Effendi, 34, was found with fatal wounds to his neck by workmates and local villagers in Riau province on Sumatra island on Saturday evening, the local conservation agency said.The victim was working on a building to lure the edible-nest swiftlet in Tanjung Simpang village when the tiger began lurking around the construction site.

Several hours after first seeing the big cat, Effendi and his three workmates — thinking the coast was clear — made a dash for safety, only to come face-to-face with the animal a short distance away.ffendi’s colleagues, who all survived the incident, told authorities they scattered to evade the animal, but the victim was not so lucky.

A search party found the victim unconscious at the edge of a river a short time later, authorities said.

“[When] they opened his clothes they saw a gaping wound on his neck,” the Riau conservation agency said in a statement.

Human-animal conflicts are common across the vast Indonesian archipelago, especially in areas where the clearing of rainforest to make way for palm oil plantations is destroying animals’ habitats and bringing them into closer contact with people.

Earlier this month, locals from Hatupangan village in North Sumatra disemboweled a Sumatran tiger and then hung the big cat from a ceiling after it attacked a pair of villagers.

Sumatran tigers are considered critically endangered by protection group the International Union for Conservation of Nature, with 400 to 500 remaining in the wild.